Double-Earthquake of Miramichi, New Brunswick, in 1982

EMR's seismologists pinpoint the epicentre of a double quake in New Brunswick's Miramichi, and surround it with portable seismographs to record the aftershocks. 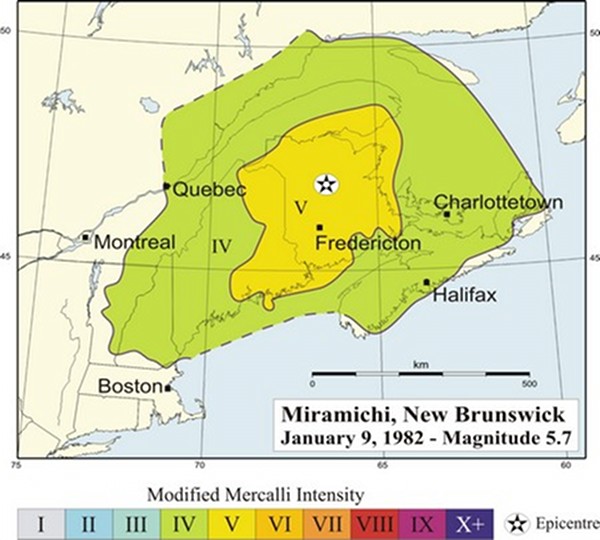 At 0853 Atlantic Standard Time Saturday January 9, 1 982, the Miramichi region of north-central New Brunswick was shaken by the largest earthquake to have affected the Maritimes since 1929. The earthquake, with magnitude 5.7, was centred in an un-populated region of the Miramichi watershed north of highway 108, about midway between Newcastle and Plaster Rock. New Brunswick residents had not yet recovered from their surprise when, 31/2 hours later, a second shock rattled through the region: a magnitude 5.1 aftershock.

Was this the end of the shaking? Radio reports quoted knowledgeable seismologists: the aftershock was not unexpected for an earthquake of this magnitude, but the sequence will now likely die down and most further aftershocks will be detectable only by sensitive seismographs. A field party from EMR's Earth Physics Branch, Ottawa, flew to New Brunswick later Saturday afternoon to install portable seismographs as close as possible to the snow-covered and frigid (-25C) epicentral region. By Sunday afternoon, January 10, three stations were in operation along highway 108.

Seismological Data Laboratory staff in Ottawa continued to monitor the after-shocks, using permanent digital seismograph stations connected by telephone circuits on-line to Ottawa (Fig.1). By Sunday morning 80 aftershocks had been detected by the very sensitive Edmundston station, confirming that a significant after-shock sequence was in progress.

By Monday morning the first field station records were available. They showed many earthquakes occurring every hour in a remote area near the Little Southwest Miramichi River north of the highway. But the active zone was inaccessible, all summer roads blocked by deep snow. Only a major effort would gain access to it.

Early Monday evening another event, only slightly smaller than Saturday morning's quake, occurred. The "knowledgeable seismologists" now allowed that a double quake had occurred in the Miramichi. Less confident about what would happen next, they recognized an unprecedented opportunity to gather valuable data. No effort should be spared.

EMR's Atlantic Geoscience Centre, the Geological Survey, three eastern U.S. universities and two U.S. geophysical companies helped with seismograph equipment and field personnel. (American seismologists also recognized a rare opportunity to study an earthquake sequence of the type that could be expected throughout New England. They did not know that a somewhat smaller (magnitude 4.5), but still significant, earthquake would occur in southern New Hampshire the following week.) New Brunswick government snowplows opened roads into the epicentral area and kept them open. Within a week portable seismographs circled the active zone, monitoring it from all sides and directly on top Fig.1.

Earthquake activity gradually decreased but still averaged four shocks an hour 10 days after the initial shock of January 9. Most were very small and could be detected only by the closest seismographs (Fig.2). But the field team servicing instruments a few km from the epicentre felt sharp jolts and heard thunder-like rumbles nearly every day.

By January 22 enough data had been collected to keep researchers occupied for many months. Portable seismographs were removed but a new digital telemetered seismograph at McKendrick Lake provided continuous on-line monitoring in Ottawa. During the first week in February, seven strong-motion seismographs, called accelerographs, were installed to record data for any subsequent larger shocks.

On March 31 and April 1, nearly three months after the initial earthquake, and after this article had been written, the strong-motion instruments were triggered by two aftershocks of magnitude 4.8 and 4.5.

EMR seismologists regularly monitor Canadian earthquakes with a national network that includes on-line telemetered stations recording at Ottawa and Sidney, B.C. Twenty to 30 times each year earthquakes are felt in Canada over a small region.Occasionally one causes damage. Portable seismographs are kept ready to deploy in an epicentral region to obtain valuable scientific data from records of aftershocks.

Significant earthquakes have occurred in eastern Canada, and the largest known have been felt in New Brunswick. In 1925 and 1929, magnitude 7 earthquakes occurred in the St. Lawrence Charlevoix zone and on the Grand Banks south of Newfoundland. Newspaper and other written accounts also tell us about earthquakes before seismograph stations were installed. For instance, in October 1869 and March1904, earthquakes of estimated magnitude 5 caused isolated minor damage in southern New Brunswick and eastern Maine. Similar events may have occurred in the Miramichi in February 1855 and July 1922, but because of sparse reports their actual locations and magnitudes are uncertain.We believe that the January 1982 earthquakes are the largest in historic time in the province. They are certainly the largest captured by modern seismographs.

The Canadian seismograph network (see Fig. 1 for the eastern portion) can now locate all earthquakes down to magnitude near 2 in the New Brunswick region. Figure 2 shows a significant concentration of earthquakes in the St. Lawrence Valley southwest of Saguenay River, and a more scattered concentration in the lower St. Lawrence centred over the north shore between Baie-Comeau and Sept-Îles. A zone of infrequent activity including most of the Gaspé peninsula separates these concentrations from New Brunswick. Within New Brunswick no significant concentrations of lower magnitude earthquakes are seen; instead the seismicity occurs in a broad scattered pattern throughout the province and extends into Maine.

The January 9 and 11 earthquakes were perceptible at ground level over all of New Brunswick and P.E.I. and parts of Nova Scotia, eastern Quebec and New England, up to 350 km away. They were felt as faraway as 700 km from the epicentre, in Ottawa and New York City, by a few occupants of high-rise buildings (which respond to the low frequency motion that propagates to great distances).

Fortunately, because the immediate epicentral area is unpopulated, damage was very slight: a few hairline cracks but no structural damage in buildings up to 100 km away.

There was no indication of any movement whatsoever in the unoccupied cabins in the epicentral area itself. We have observed elsewhere that directly over an earthquake or adjacent to a fault break there will be a strong short duration shock that produces little damage, while at some distance the seismic waves become dispersed and produce longer sustained shaking.

The data recorded for the aftershock sequences is the most comprehensive available for an earthquake sequence in eastern North America. Figure 3 shows that rates of aftershocks during the month of January; the long tail of the distribution has continued at a similar rate through February and March. Two separate, but partially overlapping, aftershock sequences follow the main shocks of January 9 and 11. An analysis of the time-magnitude distribution of these sequences can reveal information on the state of stress in the active region, its change with time, and how it returns to pre-earthquake ambient levels. Further, the second shock may have been influenced by a change in crustal stresses caused by the first shock; this may be revealed by analysing the temporal characteristics of the sequences.

Preliminary analysis of data from the four nearest seismographs operated during the field program shows the aftershocks concentrated in an area approximately 4 km north-south by 6 km east-west centred near 46o59'N, 66o37'W. They are distributed from near surface to depths of about 6 km. In larger earthquakes aftershocks are usually distributed over the plane of fault rupture that occurred during the main shock. With a detailed analysis of the aftershock data we hope to establish the three-dimensional configuration of this plane, or perhaps planes of different orientation for the two principal earthquakes.

Data from near, regional and global seismographs also can reveal the orientation of the fault break(s) as well as the direction in which the fault moved, the direction of principal crustal stresses that caused the earthquakes, and other information related to the total energy released.

Geologists visited the epicentral area the first week of the field program but, perhaps because of the snow cover, found no ground disturbances. Current geological and geophysical maps show no faults in the granite body in which the earthquakes occurred. New low level aerial photography by EMR's Canada Centre for Remote Sensing has revealed linear features that may indicate structures in the basement rocks.

Field seismic data may locate the shallow aftershocks to accuracies of the order of 100 m, pinpointing fairly precise targets for a more detailed search in the spring for surface geological evidence of the earthquakes. And logging operations may have exposed more basement outcrops since the original geological maps were prepared.

The size of the main shocks, the extent of the aftershock zone, and the fact that some aftershocks are very near the surface, all suggest that the principal earthquakes may have caused a surface fault break. If found, this will be valuable evidence to check the seismological estimates of fault orientation. It would also be the first documented evidence relating a specific earthquake to an associated surface rupture in eastern Canada.

Note; In 1989, the Ungava earthquake produce the first surface rupture of eastern Canada

Finally, what are the implications of these quakes for estimating earthquake risk in New Brunswick? Most of the province is in Zone 2, a zone of moderate risk on the 1970 seismic zoning map used in the National Building Code to set provisions for the earthquake-resistant design of buildings. The seismicity of New Brunswick (Figure 2),and therefore the calculated risk, is uniform throughout the province. It may be that the Miramichi earthquakes are just another example of a random occurrence of relatively rare moderately-sized earthquakes. However, it is important to search for any information to improve our understanding of why earthquakes occur where they do, and thereby improve our assessment of risk from similar events in future. 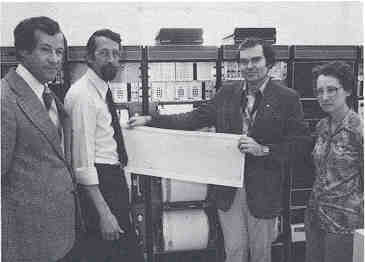 The Authors are research seismologists at EMR's Earth Physics Branch in Ottawa concerned with Canadian seismicity and earthquake risk analysis. Bob Wetmiller coordinated and led the field program for the Miramichi earthquakes. All are now engaged in analysis of the data recorded. l. to r. F.M. Anglin, Peter Basham, Bob Wetmiller and Anne Stevens, in EMR's Ottawa Seismological Laboratory