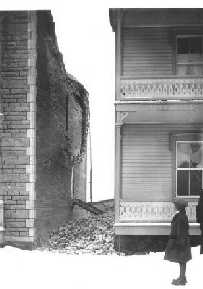 On February 28, 1925, one of the most powerful earthquakes of the 20th century rocked the lives of thousands of people -- an earthquake measuring 6.2 on the moment magnitude scale occurred in the Charlevoix-Kamouraska area. The earthquake was so strong that the shock was felt more than 1,000 kilometres from the epicentre. In the weeks that followed, dozens of aftershocks continued to shake the area, keeping the inhabitants living in fear. Over the years, numerous studies were published on this earthquake, some as recently as in 1999!

The text below provides an overview of various aspects pertaining to this earthquake. For more information on these various aspects, click on the title of each paragraph.

Hypocenter of the main shock

It is now known that the earthquake occurred along the section of the St. Lawrence near Île aux Lièvres and that its depth was about 10 km beneath the surface, i.e. approximately at the average depth of Charlevoix earthquakes.

Damage was reported in the epicentral zone as well as in Quebec City and in Shawinigan. Thanks to his field trips and his collection of newspapers of the time, seismologist E.A. Hodgson gave us numerous descriptions and pictures of damage of regions affected by the earthquake. Chimneys and unreinforced masonry buildings were found to be particularly sensitive to ground vibrations.

The earthquake was felt more than 1000 km from the epicentre. For numerous localities in Northeastern North America, felt reports were recently reexamined to build a new isoseismal map.

Aftershocks represent the readjusting of the Earth's crust following the main shock. In Charlevoix-Kamouraska, tens of aftershocks were felt during the weeks that followed. Many were recorded on the Ottawa seismograph.

Impact on the public

According to eyewitness reports and newspaper articles, it is know that the earthquake had a strong impact on the local population. Although the earthquake did not cause any direct casualties, uneasy feelings were widespread among the population. This anxiety was reinforced by the numerous aftershocks that occurred in weeks following the main shock.

Did you feel this earthquake in 1925? Do you know someone who felt it and could provide us with a description?

If so, please fill in the Intensity questionaire

Worldwide, the earthquake was recorded by 29 seismograph stations, including many in Canada. Seismologist E.A. Hodgson studied these recordings. Following several visits in the field, he described the impact of the main shock and its aftershocks.

Various aspects of the February 28, 1925 earthquake were described in numerous scientific papers. Many papers were published decades later!