Earthquake Early Warning (EEW) is the rapid detection of earthquakes, real-time estimation of the shaking hazard, and notification of expected shaking. EEW provides seconds to tens-of-seconds of notice before strong shaking starts, which can help reduce injuries, deaths, and property losses.

Natural Resources Canada (NRCan) is developing, with partners, a national EEW system designed to enhance early detection and warning in areas of moderate to high earthquake hazard and concentrations of population and infrastructure. In Canada, this earthquake risk is concentrated along the west coast of British Columbia, the Ottawa River Valley, and the Saint Lawrence Seaway.

How the system works

Earthquakes release energy that travels through the Earth as seismic waves. Seismic sensors detect the first energy to radiate from an earthquake, the P-wave, which rarely causes damage. The sensors transmit this information to data centres where a computer calculates the earthquake's location and magnitude, and the expected ground shaking across the region. This method can provide warning before the arrival of secondary S-waves, which bring the strong shaking that can cause most of the damage. 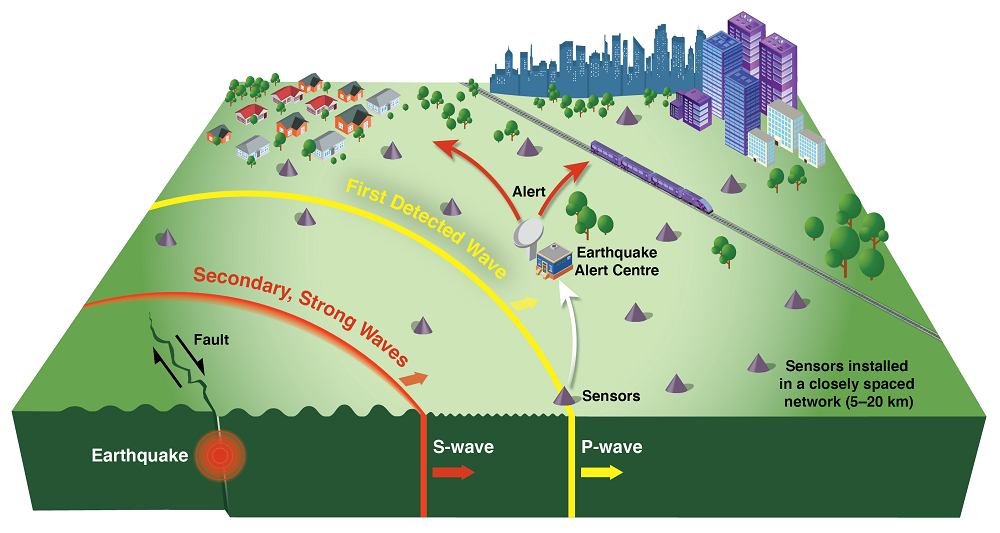 The EEW system will send out alerts

EEW alerts will be sent to the public through the National Public Alerting System and other means. Government Operations Centres and Critical Infrastructure Operators may use notifications to trigger automated responses to protect people and property.

The EEW system is designed to alert for potentially harmful earthquakes, including for strong shaking from earthquakes outside Canada's borders. NRCan is therefore working with US partners, and will be using the United States Geological Survey’s EEW software.

EEW systems cannot predict earthquakes, but they can provide up to tens of seconds of warning by detecting an earthquake immediately after it occurs. In general, it is best to assume the shaking is imminent and take immediate protective actions.

Earthquakes generating only low levels of shaking will not produce EEW alerts. Additionally, sites very close to an earthquake’s epicentre may be in the event’s “late alert zone”, within which alerting is not possible.

EEW does not remove the need for other earthquake risk reduction, preparedness and response measures, such as constructing to building code requirements.

Recipients of an EEW alert should assume strong shaking is imminent. There are several protective actions people and organizations can take within seconds of notice. Some of these might be automated, in the case of critical infrastructure and other high-risk operations, triggering automated actions as shown below. For people, this will be to Drop, Cover and Hold On.

For general information, contact the Earthquake Early Warning Program at 613-995-1006.