Intensity Report of the Saguenay Earthquake

On Friday November 25, 1988 the largest earthquake in eastern North America in 53 years occurred 35 km south of Chicoutimi, Québec and 75 km north of the Charlevoix-Kamouraska earthquake zone. This earthquake, referred to as the Saguenay earthquake, was located in a relatively aseismic region, had a calculated magnitude of 5.9 mb, 6.5 MN, and a depth of 29 km. It was characterized by a single foreshock, relatively minor aftershock activity, and a large amount of high frequency energy.

The Geological Survey of Canada distributed about 2400 questionnaires to rural postmasters in Québec, the Maritimes and Newfoundland to determine intensity distribution. Response rate was estimated to be about 75%. Supplementary information was obtained from technical reports and local newspapers. The Canadian data were combined with similar data collected by the National Earthquake Information Service in the United States and used to produce an isoseismal map. 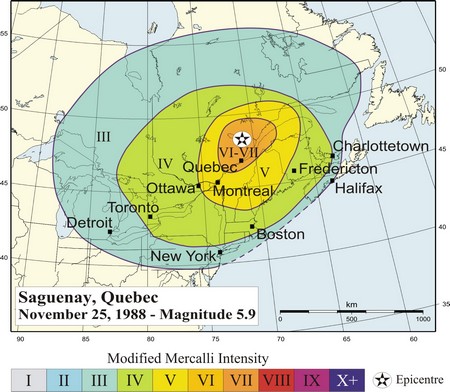 The Saguenay earthquake was felt with maximum intensity The Modified Mercalli Intensity Scale MM VIII, but more typically MM VII, in the Chicoutimi-Jonquière-La Baie area, was felt strongly by most people within 500 km, was felt by many within 1000 km and was perceptible by some people, under special circumstances, beyond 1000 km. Damage in the sparsely populated epicentral area was modest, limited to cracked or fallen unreinforced masonry walls and a few minor landslides. Damage outside the epicentral area was correlated with underlying unconsolidated deposits. The total felt area of over 3.5 million km2 is consistent with the large amount of high frequency energy and approaches that of the M6.5 Charlevoix-Kamouraska earthquake in 1925.