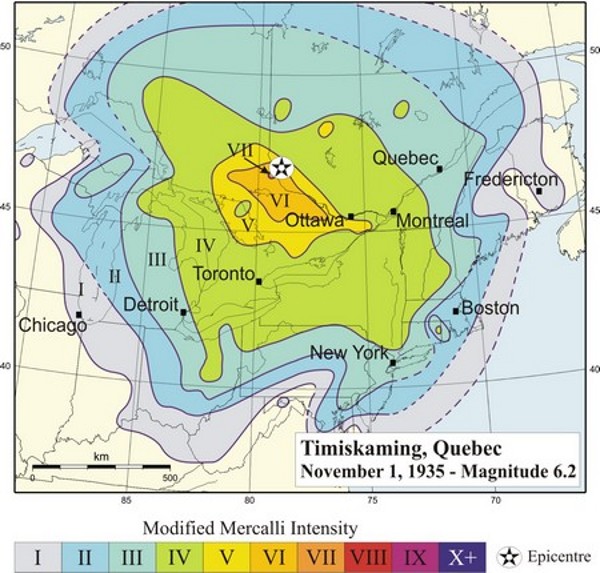 On November 1st 1935 at 06:03 Universal Time (01:03 a.m. local time), an earthquake took place approximately 10 km east of Témiscaming, Québec. This earthquake was felt west to Thunder Bay, Ontario, (then named Fort William), east to the Bay of Fundy and south to Kentucky and Virginia. 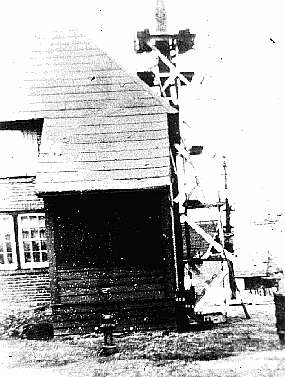 Témiscaming, Qué. In this town, Hodgson (1936a, 1936b) reported that about 80% of all chimneys were damaged which indicates a maximum intensity VII on the Modified Mercalli scale (cracked chimneys to considerable extent). In addition, cracks developed in some solid brick walls. In Mattawa and North Bay (both about 70 km from the epicentre), many chimneys were thrown down. In the epicentral region, minor rock falls were observed as well as cracks in the gravel and sand at the edges of islands and borders of lakes. In the months that followed the earthquake, numerous aftershocks were felt in Témiscaming and Kipawa (photo: Hodgson, 1936b).

The day following the earthquake, it was observed that the water of Tee Lake close to the epicentre was discolored by the earthquake. Doig (1991) proposed that this discoloration was most likely caused by resuspension of gyttja (freshwater mud with abundant organic matter) rather than silt input from tributary streams. Photo taken in spring 1936; from Hodgson (1945a).

Some 300 km away from the epicentre, near Parent, Québec, earthquake vibrations triggered a 30 metre slide of railroad embankment. Delicately balanced rocks nearby were interpreted by Hodgson as evidence that the sliding was already imminent at the time of the earthquake. Photos by Canadian National Railways, published in Hodgson (1945a)